I Have A Say Thanks to My Mom and Dad!!!

Being the oldest of 11, I am so thankful, especially now, for my Mom and Dad saying "yes" to life! Growing up, we never had a ton of money. My Dad was a high school chemistry teacher and my parents decided from the beginning that they wanted to have one of them home with us. My mom gave up her teaching career, and raised me, followed by 10 others! My Mom also taught all 11 of us at home for part of our childhood before we would head off to Nativity Catholic Grade School. My Dad worked long hours, eventually earning other degrees so that he could first become dean, then principal, and finally, when I was a sophomore, he was named Roncalli High School's first president. My Dad and Mom both sacrificed SO MUCH for us.I remember, even as a young person, getting stared at by people, and I remember the comments they would make. I can still hear a dental receptionist asking my Mom "Are these all yours? You know how children are made right?" followed by a real insidious but ditzy chuckle, followed by a secretarial gum crackle. My Mom and Dad were always tight budget wise, and I'm sure at times ached with a desire to not have to take bags of clothes from other families so that we could have clothes. I'm sure my Mom and Dad had desires to simply go to Nordstrom and buy us and give us all our own new clothes and Gameboys and Reebok Pumps etc. I'm sure they at times really wished they could just get a new car and not have to drive a fifteen passenger van around. I'm sure at times they wanted really badly to just go to a restaurant and sit back and enjoy a big expensive meal instead of having to cut coupons and craft together economic meals on the stove.But they chose life for us, and they chose sacrifice for themselves.I often think about that ditzy secretary now when our family gets together almost every weekend for dinner to laugh and hang out. Some of the siblings might be out of town or busy with other obligations, but inevitably, all weekend long, every weekend, our family gets together. Sometimes, when we're out at a restaraunt, I see the couples who are alone with each other. They hardly talk to each other and the loneliness is palpable. A part of me feels bad that we're having so much fun with our 8 tables shoved together, telling stories, laughing good hearty and healthy laughs. Sometimes I wonder if one of the couples sitting in the restaurant quietly and solemnly is that dental secretary - who now has piles of money and can eat wherever she wants, but doesn't have hardly anyone to share it with. My heart breaks for the people who are alone, especially the ones who are alone because, when they could have been having children, they instead bought into the contraception lie and lived for themselves only.I have a say today, and so do my ten younger brothers and sisters, because my parents chose life. Mom and Dad - thanks a million!!!

A Crisis Counselor, Has a Say

I have a say because my true Father granted me one.  He has been my protector from the moment I was conceived.  He gifted me to this world 28 years ago.  I was born 4 months after a doctor refused to preform an abortion on my 15 year old mother with out parental consent.  My life is important, necessary, and not a choice.  While some would look at this situation as the potential end of a poor young girl's ability to live a full and happy life, forever burdened by a mistake, these people are short sighted and don't know the rest of the story.

I was also born 5 months after my maternal Grandparent's application to adopt a fifth child was denied.  While my mother, in her sin made a poor choice, God used the circumstances to complete a family.  Shortly after I was born, my Grandparents officially became Mom and Dad.  I was raised to follow Christ, taught the sanctity of life and the dignity of every person, and always cherished for the gift I was.

I have never used contraception of any kind, I've only ever had sex with my husband, and only after we were married.  By abortion and contraception supporters I have been called the the following; un-evolved, lacking in life experience, "one of those girls", a fundamentalist, and brainwashed, just to name a few.  The assumption is I must be uneducated and easily swayed, a helpless woman, unenlightened, and unable to think for herself.

Nothing could be further from the truth, but my academic resume is immaterial. I am trained in Crisis Intervention and have seen  more women than I would have liked following their abortions.  It doesn't mater if it is the night of the abortion and they are being brought in after a suicide attempt, or 20 years later and they are seeking help with marriage problems, the pain is still as debilitating.

The very acts which Pro-Choice supporters claim as women's liberties and freedoms, are, in fact, prisons that these women rarely free themselves from.
Posted by Father John Hollowell at 5:00 AM

Send In Your Story

Send me your story to let the world know why you are thankful that your parents chose life, thus allowing you to have a say!! Send stories to fatherjohnhollowell@protonmail.com

Planned Parenthood vs. The Catholic Church

How The Pill ACTUALLY Works!

I Have a Say Photo Montage

College Women Have a Say 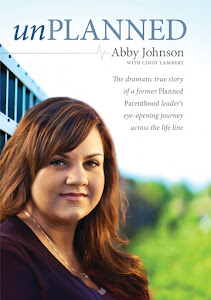 Good News About Sex and Marriage